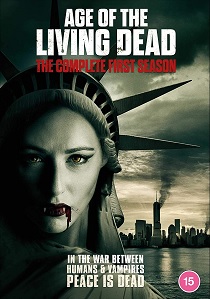 In an America quarantined by the rest of the world behind huge border walls, humans and vampires co-exist on opposite coasts thanks to a peace treaty, while each side plots to destroy the other. When a young woman appears at a base in the No Man's Land area between the two factions, both sides realise they may have the secret weapon needed to kill the other once and for all.

Age of the Living Dead is released for the first time on DVD 7th September 2020 from Kaleidoscope Home Entertainment.