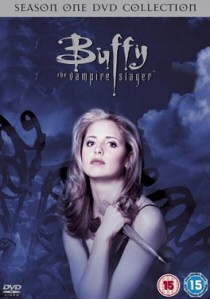 Remember the first time you saw Buffy the Vampire Slayer? To celebrate 10 years since Buffy first arrived in the UK, the excitement surrounding this essential and chillingly original series is starting all over again on DVD from Twentieth Century Fox Home Entertainment!

Created by Joss Whedon (Serenity, Firefly), Buffy the Vampire Slayer inspired many of today's popular new supernatural sci-fi shows, and is still as fresh and enjoyable as it was on its debut episode. Praised by critics for its sharp humour and clever scripts, Buffy the Vampire Slayer introduces us to Buffy Summers (Sarah Michelle Gellar; Cruel Intentions, The Grudge), a teenager who moves to the town of Sunnydale to start afresh and escape her vampire slaying days. However, it soon becomes apparent that she can't escape her destiny as the 'chosen one'. Buffy's slaying powers are in high demand in Sunnydale, for unbeknown to her the town rests on the jaws of Hell.

Whilst settling into her new school, Buffy encounters the sultry and mysterious Angel (David Boreanaz; Bones) and finds herself irresistibly drawn to him. As she gradually uncovers his terrible past, she tries to resist his charm and seeks solace in her newfound friends, Willow (Alyson Hannigan, American Pie) and Xander (Nicholas Brendon). Follow Buffy through high school and college as she encounters a host of friends, demons and love interests, including Spike (James Marsters), Cordelia (Charisma Carpenter), Riley (Marc Blucas) and Tara (Amber Benson).

Twentieth Century Fox Home Entertainment is thrilled to present all seven seasons of Buffy the Vampire Slayer on DVD at a fantastic new price for a short time only. Each box-set will be available with an amazing 40% off the original price, also including all five seasons of the spin-off series Angel!

The DVD box-sets offer the perfect opportunity for fans to immerse themselves once again in the world of Buffy and Angel. Slayer enthusiasts now have the opportunity to discover new episodes, storylines and characters both good and evil, as they catch up on any episodes they may have missed!

With twists and turns, stabs and spikes, romance and vampires, it's not for the faint hearted, but you'll savour every mouthful! Give your DVD player a jolt of high voltage vampire action and wish Buffy a happy birthday this Spring! 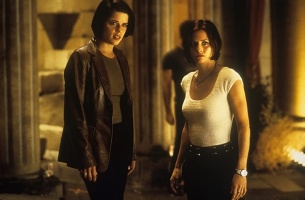 HotUHD
Two years after the first series of murders, as Sidney acclimates to college life, someone donning the Ghostface costume begins a new string of killings as Scream 2 is arrives on 4K UHD for the first time 3rd October 2022 from Paramount Home Entertainment. END_OF_DOCUMENT_TOKEN_TO_BE_REPLACED
Comments
BD Releases News Pick