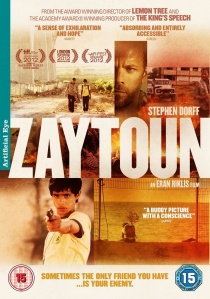 Beirut 1982: the First Lebanon War is in full force as the Israeli army clashes with PLO militants and Syrian and Lebanese forces. Living among the rubble and unexploded shells is Fahed, a young Palestinian boy who has recently lost his father in an air raid.

When he captures Yoni (Stephen Dorff), an Israeli pilot shot down over his town, Fahed seizes the opportunity to use his prisoner as a way to get back into Israel and visit the town where his grandfather once lived. On the journey the two must overcome bitter differences if they are to survive and a tenuous friendship slowly begins to take root amid the barren debris of war...

Powerful, moving and utterly compelling, Zaytoun, released on DVD and Blu-Ray by Artifical Eye on 8th April 2013, is a modern classic of the war genre from the award-winning producer of The King's Speech.

HotUHD
StudioCanal is thrilled to announce that the iconic cult classic, Highlander, is being released to own on 4K UHD for the very first time 31st October 2022 with brand-new artwork from celebrated artist Matt Ferguson. END_OF_DOCUMENT_TOKEN_TO_BE_REPLACED
Top PicksView