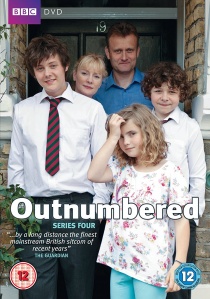 NewsTV SeriesComedy
News Article Go back to homepage
When is Jake going to bring round his mysterious girlfriend? Why is Karen suddenly so obsessed with 'browsing'? ... and just what is Ben up to with the washing machine? Outnumbered - Series 4 is back on DVD on 21st November 2011 from 2entertain.
Samantha Bond, Ramona Marquez, Daniel Roche, Tyger Drew-Honey, Claire Skinner, Hugh Dennis
Guy Jenkin, Andy Hamilton
Pat Lees, Jimmy Mulville, Guy Jenkin, Andy Hamilton
2entertain
Unknown
21/11/2011
Thank you for supporting DVD365.net when you order using the link(s) below. As an Amazon Associate we earn from qualifying purchases
Buy DVD
Information

Outnumbered, the multi-award-winning comedy series from Hat Trick Productions, is back on DVD on 21st November 2011 from 2entertain. Written by Andy Hamilton and Guy Jenkin (creators of Drop the Dead Donkey), this critically acclaimed comedy puts three children at the very centre of the story and allows them to improvise into the bargain, capturing family life at all its most deliciously chaotic. Outnumbered - Series 4 will also be available as a digital download.

A year is a long time in the Brockman household. But older doesn't necessarily mean wiser as the family negotiate a host of new challenges.

In this brand new series, Jake wrangles with Mum and Dad about the source of his cash flow, Ben baffles his secondary school classmates and teachers with perplexing particle physics theories and Karen has joined a coven of fashion obsessed 9-year-old girls. While shopping may now be a vital pursuit, her grasp of logic and reason remain as finely honed as ever. Charity workers beware...

This hilarious release also features deleted & extended scenes and this year's Comic Relief sketch starring Andy Murray. A Series 1 to 4 boxset will also be available on 21st November in perfect time for Christmas.

HotDVDTV
Featuring every episode of the entire series in an 8-disc box set, the hilarious BBC comedy Keeping Up Appearances is released on DVD 28th November 2022 ... END_OF_DOCUMENT_TOKEN_TO_BE_REPLACED
Top PicksView