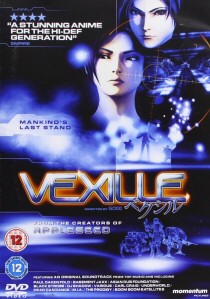 Hailed during its UK theatrical release as a work of 'stunning futuristic animation' by the Guardian Guide and by Metro (London) as a 'superior, elegantly nuanced sci-fi anime', Vexille comes to DVD from Momentum Pictures on 1st September 2008 as a special two-disc release in a limited edition Steel Book case.

The release is packed with exclusive fan-pleasing extra features that include an audio commentary by Jonathan Clements, an extended interview with director Fumihiko Sori on the making of the film, voice cast and music recording footage, interviews with Sori filmed at the Locarno Film Festival, a look at how 3D animation is made and at Sori's work as an animation creator, plus bonus footage from Sori's forthcoming live action feature, Ichi.

Directed by Fumihiko Sori (Ping Pong) and utilising the talents of the creative team behind the groundbreaking CG anime 'Appleseed', the epic Vexille is a stunningly realized CG animated sci-fi feature that further pushes the boundaries of what viewers have come to expect from a cinematic revolution that has already amazed filmgoers through the works of animation directors such as Mamoru Oshii (Ghost In The Shell 2: Innocence), Satoshi Kon (Paprika) and Hayao Miyazaki (Howl's Moving Castle; Spirited Away). The year is 2077.

A decade earlier, robot technology had become so advanced that the United Nations, concerned that further developments may lead to the 'weaponization' of the human body, passed a resolution banning the use of android technology. Choosing to defy the treaty in order to allow the mega-corporation, Daiwa, to continue its research, Japan became a lone, renegade nation effectively shutting itself off from the rest of the world.

Isolated and shielded from all outside communication and satellite surveillance, with nobody having entered or left the country for ten years, Japan has become a mystery to all those living outside its borders. Fearing that Daiwa may now have taken its bio-tech android programme to the ultimate extreme, a crack US Special Forces Unit is tasked with infiltrating Japan on an intelligence mission. Led by a determined, young female commander, Vexille, the unit hooks up with a band of Japanese underground rebels who have refused to conform to the dictates of the Daiwa Corporation. But what Vexille and her team uncover inside Japan proves to be far more devastating than anybody could possibly have imagined and soon they find themselves fighting a battle that will determine the future of all humanity.

Described by The Times as 'a chillingly beautiful vision of a dystopian future' and as 'simply breathtaking' by SFX magazine, Vexille is an action-packed, vividly rendered fantasy adventure enhanced by an exhilarating musical score by international DJ Paul Oakenfold (who also scored Appleseed).