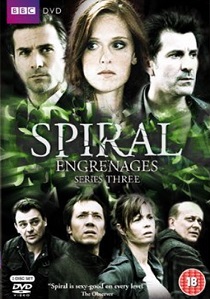 Spiral, the critically acclaimed French police thriller returns for a third series, darker and sharper than ever. Delve into the seedier side of Paris as the team descend into the sinister and uncompromising world of organised crime. Gritty, stylish and nail-bitingly tense, the series that leaves you dying for more is released on DVD from 1st August 2011 from 2entertain.

When the mutilated body of a young woman is found on a disused railway track in the north of Paris, Police Captain Laure Berthaud leads her squad on the hunt for what she believes to be a deranged serial killer, delving into the mysterious recesses of a disturbed mind.

As the world of each character spirals out of control, the pace quickens, the narratives overlap and the boundary between private and professional lives becomes increasingly blurred in this superbly taut thriller.

A box set of all three series is also available from 1st August 2011.

BD
After moving to a new town, two brothers discover that the area is a haven for vampires as the classic The Lost Boys is released on 4K UHD 20th September 2022 from Warner Home Video. END_OF_DOCUMENT_TOKEN_TO_BE_REPLACED
Top PicksView