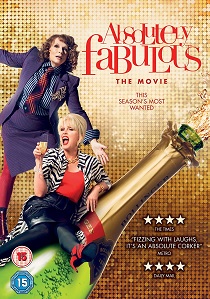 Twentieth Century Fox Home Entertainment is decking the halls with Bolly this Christmas as Absolutely Fabulous: The Movie makes its seasonal debut on Digital HD from 21st November 2016 and on DVD, Blu-ray & on demand from 5th December 2016.

The movie follows the outrageous antics of Edina and Patsy who are still oozing glitz and glamour, living the high life they are accustomed to; shopping, drinking and clubbing their way around London's trendiest hotspots. Blamed for 'killing Kate Moss' at an uber fashionable launch party, they become entangled in a media storm and are relentlessly pursued by the paparazzi. Fleeing penniless to the glamorous playground of the super-rich, the French Riviera, they hatch a plan to make their escape permanent and live the high life forevermore!

In true Ab Fab style, the cast are joined by a host of celebrities from the acting, music and fashion worlds with over 60 cameos featured in the film including Kate Moss, Lulu, Emma Bunton, Abby Clancy and many, many more.

Absolutely Fabulous: The Movie on Blu-ray & DVD is stuffed with special features including deleted scenes, outtakes, a special 'On Set with Dame Edna' filmed interview, promotional featurettes and a gallery. It's the perfect gift for every Christmas stocking this year!