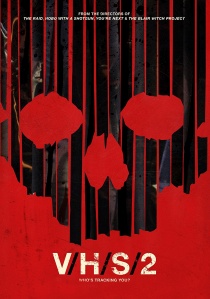 Following on from the hugely successful and critically acclaimed horror anthology V/H/S comes a sequel of even greater ingenuity with its momentous thrills and game-changing photography!

Featuring a roster of talented directors at the very top of their game, V/H/S/2 undeniably breathes new life into the horror genre with such originality that it'll leave you rewinding the scares time and time again.

Searching for a missing student, two private investigators decide to break into a derelict suburban house with the sole purpose of finding clues that could lead to his whereabouts. However, upon arrival they discover an abandoned collection of VHS cassettes stacked in front of a wall of flickering television sets. As they bravely watch the horrific contents of the cassettes, each one more shocking and disturbing than the last, it soon becomes apparent that there may be dark motives behind the student's vanishing. The contents of those VHS cassettes are as follows:

A patient has a camera installed in his eye for monitoring and medical research purposes after a car accident damages his eyesight. Unbeknownst to him the camera picks up more than just his standard vision, leading the patient into a terrifying ordeal.

A cyclist must fight for his life when he discovers a bloodied woman hysterically screaming deep in the forest having been attacked by zombies.

A news crew are granted access to the home of an Indonesian cult to report the mysterious goings-on.

A slumber party turns into a fight for survival when it's interrupted by a group of dangerous extra terrestrial visitors.

Related Articles
Contracted: Phase I
The Raid 2, The Raid, Gangs of London
Hobo with a Shotgun
Séance
For your consideration 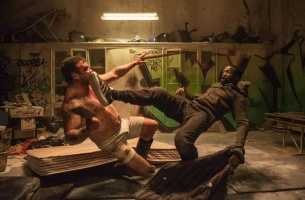 HotDVDBDTVBoxset
Released on DVD and Blu-ray 27th July 2020 from Dazzler Media, created by visionary award-winning filmmaker of The Raid, Gangs of London takes audiences on an immersive journey into the hidden heart of the capital. END_OF_DOCUMENT_TOKEN_TO_BE_REPLACED
Comments
DVD Releases News Pick