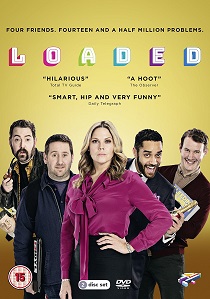 Four life-long friends sell their start-up and become multi-millionaires overnight, but their troubles have only just begun, in Loaded, the hilarious, timely sitcom from Channel 4 which arrives on DVD on 10th July 2017, thanks to Acorn Media International.

Meet Josh, Leon, Ewan and Watto. They started Idyl Hands Games, the team behind inane app, Cat Factory and they've just sold the company to US investors for a cool £300 million. They might have grown up in each other's pockets, but now those pockets are lined with gold and suddenly their loyalties are being tested and the cracks are beginning to show... On top of that, instead of life getting easier, it's become a whole lot harder as the boys discover that suddenly they have bosses they have to report to, including the ruthless Vice President for Acquisitions, Casey (Mary McCormack - The West Wing), who's permanently on their case.

Josh Connors (Jim Howick - Horrible Histories) is the moral compass of the group. Riddled with insecurities, his decisions are mostly driven from a deep sense of worry and anxiety. He's tortured by the windfall and desperate to win back his ex-girlfriend Abi. But will it drive a wedge between the friends?

Leon Harper (Samuel Anderson - Doctor Who), is the smooth talking, cocky business development director, who secured the deal and is always game to party. But will his charm manage to keep the new American bosses sweet?

Mark 'Watto' Watson (Nick Helm - Uncle) is the creative one, an artist, musician and only recently sober after years of drug and alcohol use. He created the game's artwork during his "mushroom period" but now his only addiction is buying things... and trying to form the band of his dreams.

Ewan Fox (Jonny Sweet - Babylon) is the Director of the Coding Team and keeps the Cat Factory servers ticking over. But living with a bucket load of self-doubt, will the money bring a new found confidence - and are the others ready for their beta-pal to become the alpha male?

Loaded is a hugely entertaining look at male friendship, ambition, wealth and what happens when you sell your soul to the devil.

BD
After more than thirty years of service as one of the Navy's top aviators, Pete 'Maverick' Mitchell is back where he belongs as Top Gun: Maverick flies onto DVD, Blu-ray and 4K UHD 31st October 2022 from Paramount Home ... END_OF_DOCUMENT_TOKEN_TO_BE_REPLACED
Top PicksView