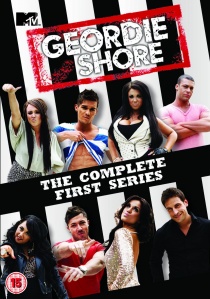 MTV UK's highest rating show, Geordie Shore: Series 1 will be released on DVD on November 7th 2011 from Paramount Home Entertainment. As well as 6 episodes packed full of unforgettable antics, the DVD reveals exclusive behind the scenes footage of the lads and lasses responsible for the infamous headlines.

Inspired by the hit US phenomenon, Jersey Shore, the city of Newcastle becomes the latest stomping ground for this gang of eight tanned and buffed individuals, Series 1 spans over six weeks capturing all the action and unadulterated partying that took place on 'the toon.'

Living in a gorgeous five star house, complete with shared bedrooms, a hot tub and a shag-pile outhouse for 'special visitors', MTV cameras catch the action as the 8 loud and proud Geordies work during the day for a promotions company and get their tash on at night, at some of the most renowned hotspots on the Diamond Strip.

There are tears, tantrums, drama and outrageous behaviour by the bucket-load ... and that's just from the boys!

Meet buff Jay, the partying machine who hits the town every night of the week and who prides himself on having a different girl at his beck and call on speed dial. Then there's cheeky chappy Gaz, whose claim to fame is having a control. Both Gaz and Jay are ready for action with the ladies 24 hours a day - so long as it doesn't interfere with their regular tanning, waxing and gym sessions, that is!

Self-confessed professional poser James likes to think of himself as Newcastle's leading man and admits he can't walk past a reflective surface without checking he looks 'mint'. A real lad about town James sees himself as a trendsetter, yet under this stylish façade is a quiet and sensitive boy.

Gorgeous Geordie Greg is a real ladies man who has no problem attracting the opposite sex with his killer good looks. As he has more than his fair share of admirers, for Greg it's about quality and not quantity so not all lasses make it into his phone book. Always up for a good time, Greg spends up to five night's a week out on the Toon and isn't afraid to splash the cash.

Impulsive Geordie joker Gaz is a cheeky chappy who likes to keep the lasses happy with his manhood the size of a TV remote. He lives for the moment and loves making the most of being young, free and single. Not one to take life too seriously, he tries to inject a dose of good-time Geordie juice into whatever he's doing. He prides himself on knowing everyone in Newcastle - with one of his best mates being ex Big Brother winner Anthony Hutton.

Size 8 stunner Charlotte 'loopy' Letitia, goes nowhere without her signature knee high socks, short skirts and bruises from her latest partying antics. It's fair to call Charlotte an attention seeker who's more than a bit ditzy and she's always ready to pounce on any decent lad that come her way.

Nutter Sophie is a real entertainer who loves to have a laugh wherever she goes. Despite her bright girlie wardrobe and bling accessories, she's a tomboy at heart but has no problem dancing on tables or flashing her boobs- basically anything goes for this pint sized bundle of fun.

Leggy Vicky VIP's name is always on the list, but behind her killer strut is a sensitive girl who always looks out for her mates. Her aloof personality and perfect pout never fail to attract the lads, but lasses beware if you look at her the wrong way, as you'll end up getting "swilled" (a drink poured over you!).

Holly is a girl who has one thing on her mind. and it isn't her boyfriend Dan. In fact, whilst he thinks they're Middlesbrough's version of Posh and Becks, she makes sure the only pair under the spotlight are her FF fake boobs which Holly tricked her Mum into buying.

DVD
For the first time in the cinematic history of Spider-Man, our friendly neighborhood hero's identity is revealed in Spider-Man: No Way Home, released on DVD, Blu-ray and 4K UHD 4th April 2022 from Sony Pictures Home ... END_OF_DOCUMENT_TOKEN_TO_BE_REPLACED
Top PicksView