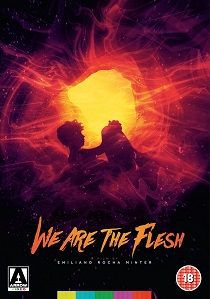 A visionary and bizarre slice of Mexican arthouse cinema, We Are The Flesh is an extraordinary and unsettling film experience, a sexually charged and nightmarish journey into an otherworldly dimension of carnal desire and excess, as well as a powerful allegory on the corrupting power of human desire.

A young brother and sister, roaming an apocalyptic city, take refuge in the dilapidated lair of a strange hermit. He puts them to work building a bizarre cavernous structure, where he acts out his insane and depraved fantasies. Trapped in this maddening womb-like world under his malign influence, they find themselves sinking into the realms of dark and forbidden behaviour.

Mixing the graphic, powerful imagery of Gaspar Noe's Love and Enter The Void with the surreal, hallucinatory impact of Alejandro Jodorowsky, We Are The Flesh is a bizarre, psychedelic head trip, mixing intense, outrageously explicit imagery with a profound allegory on the nature of existence, to make this an unforgettable, boundary-pushing experience unlike anything you've ever seen.

We Are The Flesh is released on DVD and Blu-ray by Arrow Video on 13th February 2017.

HotUHD
After moving to a new town, two brothers discover that the area is a haven for vampires as the classic The Lost Boys is released on 4K UHD 20th September 2022 from Warner Home Video. END_OF_DOCUMENT_TOKEN_TO_BE_REPLACED
Top PicksView