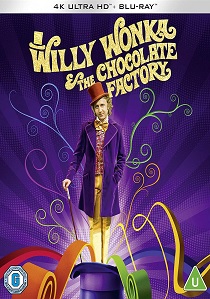 Willy Wonka and the Chocolate Factory (1971)

Based on the children's classic by Roald Dahl, take an unforgettable, uniquely magical, musical journey through the deliciously delightful, whimsically wonderful world of Willy Wonka and the Chocolate Factory, released on 4K UHD for the first time 28th June 2021 from Warner Home Video.

When eccentric candy man Willy Wonka (Gene Wilder) promises a lifetime supply of sweets and a tour of his chocolate factory to five lucky kids, penniless Charlie Bucket (Peter Ostrum) seeks the priceless golden ticket that will make him a winner. Thanks to his Grandpa Joe (Jack Albertson), Charlie gets the prize of his dreams! But a far more wonderful surprise than Charlie ever imagined awaits him.

In a land of chocolate waterfalls, giant lollipops, edible flowers and, of course, Oompa Loompas, it's nonstop, mouth-watering fun in the timeless fantasy Willy Wonka and the Chocolate Factory.