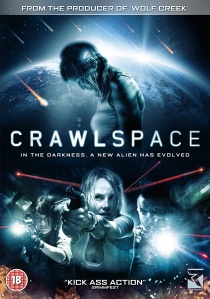 In the darkness, a new alien has evolved. From the producer of Wolf Creek, Crawlspace is released on DVD and Blu-Ray by Revolver Entertainment on 18th February 2013.

Deep beneath the sands of the remote Australian outback lies 'Pine Gap', a top secret research facility established by the US and Australian Governments.

When all contact is lost with the military compound, a heavily armoured special forces unit is sent in to find out what has happened. As their search takes them deeper into the bowels of the labyrinthine facility, they soon discover that something terrible has escaped.

Under attack and with their numbers dwindling, the remaining soldiers must fight their way out through a steel maze that crawls with unimaginable terrors.

In the darkness, when the bullets run dry, all that's left is to pray for a quick death.

DVD
In Brian And Charles, released on DVD and Blu-ray 10th October 2022 from Mediumrare, an inventor lives alone in a remote village in the countryside, inventing useless things out of found objects in his garage. That is until ... END_OF_DOCUMENT_TOKEN_TO_BE_REPLACED
Top PicksView