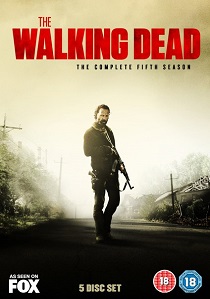 The Walking Dead returns with a critically acclaimed fifth season, delivering more action and suspense than ever before. As the world overrun by the dead takes its toll on the survivors, interpersonal conflict presents an even greater danger to the continuing survival of the humans. The Walking Dead: The Complete Fifth Season arrives on Blu-ray and DVD on 28th September 2015, courtesy of Entertainment One.

After the stunning Season Four finale, Rick (Lincoln) and the group remain outnumbered, out-gunned and awaiting to discover their fate at the hands of their captors at Terminus. Are these survivors over-precautious new friends or an unnerving new foe? No matter the result, the group knows now more than ever they will need to fight the living if they wish to survive in the world of the dead.

Packed full of thrilling twists and turns, fan-favourite characters and landmark story-arcs, don't miss The Walking Dead: The Complete Fifth Season as it arrives on Blu-ray and DVD from 28th September 2015, courtesy of Entertainment One.

UHD
The surviving members of the resistance face the First Order once again, and the legendary conflict between the Jedi and the Sith reaches its peak as Star Wars: The Rise of Skywalker is released on ... END_OF_DOCUMENT_TOKEN_TO_BE_REPLACED
Top PicksView