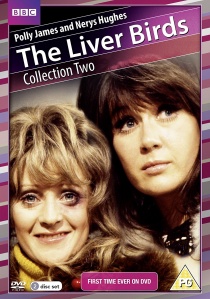 Hot on the heels of Beatlemania, 1970s Liverpool was a city famed for its wit and its football, with its team dominating England and well on their way to becoming the kings of Europe. It was also home to The Liver Birds a seminal 70s sitcom, one that broke new ground and offered up a look at life around the Mersey from a woman's perspective and a female counterpart to the north-east's The Likely Lads.

The third series of the much-loved sitcom starring Polly James and Nerys Hughes is making its DVD debut courtesy of the Acorn label from RLJ Entertainment. Set in Liverpool this hilarious comedy was penned by the talented Carla Lane (Solo, Bread, Butterflies) and comes to DVD as The Liver Birds Collection Two, which is comprised of the complete third series in transmission order. This follows the previous release by Acorn of The Liver Birds Collection One, which features series two, the original pilot and the four episodes that made up Series One are missing, believed wiped. This fantastic set will be available on DVD for the first time on 7th July 2014.

Sandra (Nerys Hughes) and Beryl (Polly James) have just moved into a bigger and more comfortable flat. They face all of life's challenges with a smile and the occasional song, from the risks of becoming Miss Hot Pants 1972 to the perils of pet parrots and hired horses; from cranky Christenings and Valentine's Day-doings to a very special poetry reading led by everybody's favourite Liverpudlian poet in a real-life appearance, Roger McGough.

The Liver Birds are back with thirteen richly comedic episodes available for the first time ever on DVD featuring the hit theme tune by The Scaffold.