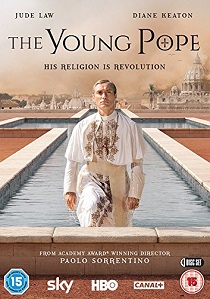 One of the year's most talked about series The Young Pope featuring Jude Law in one of his finest performances yet, is set for its home entertainment release on 26th December 2016 courtesy of Dazzler Media.

Helmed by Oscar-winning Italian director Paolo Sorrentino (The Great Beauty, This Must Be The Place), The Young Pope has taken the world by storm, with its controversial subject matter, stunning performances, epic sets, dark humour, atmospheric mood and gripping plot.

This outstanding papal series follows the early days of Pope Pius XIII, young American Lenny Belardo (Law - Sherlock Holmes, The Talented Mr Ripley), who has been elected to the highest office in the Catholic church, after a failed plot for power by his mentor. It soon becomes clear that Pope Pius XIII is no ordinary pontiff.

With his outrageous demands and rebellious ways, it's clear that Lenny Belardo won't follow the Vatican's rules. Refusing to bow to their guidance, he employs Sister Mary (Diane Keaton - The Godfather, Annie Hall), the woman who looked after him as an orphan, as his closest advisor and soon the very foundations of the church are threatened.

Also starring James Cromwell (L.A. Confidential, The Green Mile), Silvio Orlando (Il Caimano, Giovanna's Father), Ludivine Sagnier (Swimming Pool, Un Secret), Javier Cámara (Talk To Her, Bad Education) and Scott Shepherd (Bridge of Spies, Side Effects), the 10-part series is currently airing on Sky Atlantic and is set to arrive as a four-disc set on both DVD and Blu-ray and on digital on 26th December 2016.

HotDVDBD3D-BDUHD
The grave course of events set in motion by Thanos that wiped out half the universe and fractured the Avengers ranks compels the remaining Avengers to take one final stand in Marvel Studios', Avengers: Endgame, released on DVD, Blu-ray, 3D Blu-ray and 4K-UHD 2nd September 2019 from Walt Disney Home Entertainment. END_OF_DOCUMENT_TOKEN_TO_BE_REPLACED
Top PicksView