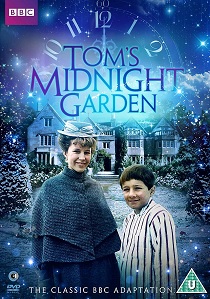 Based on of the much-loved novel by Philippa Pearce, this beguiling six-part series is set for its DVD release on 12th November 2018 and arrives with a fascinating new special feature "A Look Back With Director Christine Secombe".

When his brother is taken ill with measles, Tom Long (Jeremy Rampling), is sent to stay with his aunt and uncle for the summer and soon finds himself lonely and bored. One night whilst lying in bed he hears the old grandfather clock in the hall strike thirteen. Venturing down stairs to investigate, he opens the door and finds himself magically transported back in time to a Victorian garden and an incredible adventure with a new-found friend Hatty (Caroline Waldron).

This fabulous series is a wonderful fantasy tale that will delight the whole family.

BD
After more than thirty years of service as one of the Navy's top aviators, Pete 'Maverick' Mitchell is back where he belongs as Top Gun: Maverick flies onto DVD, Blu-ray and 4K UHD 31st October 2022 from Paramount Home ... END_OF_DOCUMENT_TOKEN_TO_BE_REPLACED
Top PicksView