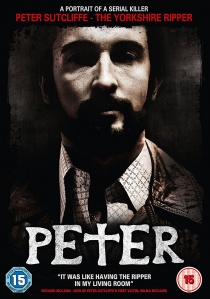 News
News Article Go back to homepage
Peter - A Portrait Of A Serial Killer is the first full-length feature film based on Sutcliffe's evil rampage and is expected to generate huge controversy when it is released on retail DVD by High Fliers on 24th October 2011.
Grahame Edwards, Julie Hoult, Tracey Wilkinson, Adam Lewis, Gary Sharkey, Walt Kissack
Skip Kite
Sanjay Kumar, Jacqueline Jean-Louis
High Fliers
1 hour 24 minutes
24/10/2011
Thank you for supporting DVD365.net when you order using the link(s) below. As an Amazon Associate we earn from qualifying purchases
Buy DVD
Information

Peter Sutcliffe is the notorious serial killer known as the Yorkshire Ripper who went on a five-year murder spree in and around Bradford in the late Seventies during which he murdered 13 women and attempted to murder a further seven. He was eventually arrested in 1981 and sent to Broadmoor secure hospital in 1983 after being diagnosed with paranoid schizophrenia and where he now remains.

Peter - A Portrait Of A Serial Killer is the first full-length feature film based on Sutcliffe's evil rampage and is expected to generate huge controversy when it is released on retail DVD by High Fliers on 24th October 2011.

Starring Sheffield-based actor Walt Kissack, the film will take its audience on a unique journey into the mind of Peter Sutcliffe and invites its audience to decide for themselves what turned Sutcliffe from a seemingly ordinary person who shunned the limelight into a notorious killer. It combines the story as seen through the filmmaker's eyes with genuine archive footage shot at the time. Great care has been taken to ensure factual accuracy and authentic period details.

It starts with his formative years in Yorkshire, re-lives one of the largest police manhunts in history and then re-creates the on-going programme of psychological treatment he is currently receiving in Broadmoor. It exposes his warped views of women. examines his relationship with a psychiatrist in Broadmoor and looks at the bonds he formed in his adult life, particularly with his wife Sonia.

Commented Richard McCann who saw the film at a preview screening at the end of last year: "I found it one of the most powerful films I've ever watched. It did shock me but also taught me things I never knew about Peter Sutcliffe". McCann added: "In a word this film is 'uncompromising' and because of that, controversial. It asks the audience difficult questions ... questions about retribution, guilt, sin and forgiveness".