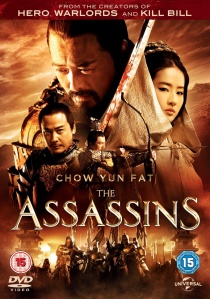 Filled to the brim with stunning visuals, Eastern promise and superstition, this historical tale of political intrigue and doomed romance boasts the visual talents of cinematographer Zhao Xiao Ding, a regular collaborator of Zhang Yimou who was nominated for an Oscar for his stunning work on House of Flying Daggers.

The Assassins sits up there with the best martial arts epics of recent years - and it will take your breath away.

In the early era of the Chinese Han Dynasty, Prime Minister Cao Cao (Chow Yun Fat) ventured to the east and savagely defeated China's greatest warrior Lv Bu, terrifying every warlord across the country before crowning himself the King of Wei. Meanwhile, young lovers Mu Shun (Tamaki Hiroshi) and Ling Jv (Crystal Liu Yi Fei) were taken from a prison camp to a hidden tomb where they spent five cruel years being trained as assassins for a secret mission.

Over twenty years later, astronomical signs began to predict dramatic change and as a result, Cao's son Cao Pi (Qiu Xin Zhi) and his followers urged Cao to become the new Emperor, unaware that opposing forces were plotting against him...