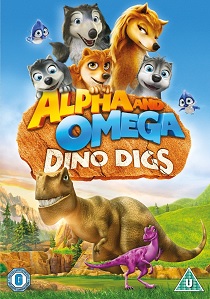 Join your family's favourite furry friends in Alpha and Omega: Dino Digs, the brand new animated adventure of prehistoric proportions out this half term! In the fifth instalment of the Alpha & Omega franchise, Humphrey and Kate move to new grounds and discover Amy, an affable dinosaur who is unfamiliar with the new world.

After wolves Kate, Humphrey, and their three pups are forced to relocate their den, they discover Amy, a friendly raptor that magically came to life after being uncovered during a big dig! The pups and their forest friends show Amy the wonders of their new world, and must work together and try to stop the diggers from unearthing the dangerous T-Rex be fore it's too late! Alpha and Omega: Dino Digs is the latest installment in the hugely successful animated series.

UHD
The end of the line is only the beginning in a wild, non-stop thrill ride through modern-day Japan as Bullet Train is released on DVD, Blu-ray and 4K UHD 24th October 2022 from Sony Pictures Home Entertainment END_OF_DOCUMENT_TOKEN_TO_BE_REPLACED
Top PicksView