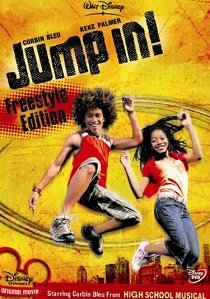 This summer get set for Double Dutch, the fast-paced team skipping sport, to become the latest playground craze as Jump In! the smash hit Disney Channel Original Movie makes its Disney DVD debut on 2nd July 2007.

Bursting with energy, a jumpin' soundtrack and some brilliant Double Dutch routines, the Disney DVD also delivers a selection of bonus features you won't see on TV, including a lesson from Corbin on how to Double Dutch and an exclusive behind-the-scenes featurette Inside the Ropes.

Bleu plays Izzy Daniels, a Brooklyn teenager whose dad, played by Bleu's real father David Reivers, wants him to become a boxing champion. As Izzy trains hard for his next fight, his next door neighbour Mary (Keke Palmer) is training just as hard with her Double Dutch team, a pastime Izzy finds hard to take seriously. However, when one of Mary's teammates quits just before the city finals, Izzy step in to help and quickly grows to love the teamwork and creativity of the sport, but will he feel the same when the whole school discovers why he has been missing his boxing practise?

With the hottest soundtrack of the summer including tracks by Bleu and Palmer, brilliant high-energy action scenes and a heart-warming storyline about following your heart and being who you want to be, Jump In! is set to hip-hop its way onto Disney DVD from 2nd July 2007.

Teenager Izzy Daniels is an undefeated boxing champion whose dad, owner of the local boxing gym, is pressuring him to train hard for the Golden Gloves contest. When Izzy's little sister drags him to a Double Dutch contest to watch their neighbour Mary, Izzy begins to see the sport of Double Dutch and also Mary in a different light.

So when one of Mary's teammates quits the squad for a rival Double Dutch team, Izzy offers to step in until they can find a replacement. Izzy soon realises he prefers Double Dutch to boxing and begins to miss boxing practises to train with the Double Dutch girls as he and Mary grow even closer. However when fellow boxer, and neighbourhood bully Rodney discovers the team practicing one morning, he tells the whole school and Izzy becomes a laughing stock. Izzy must now find the courage to stand up to his dad and his school and follow his own dream.

HotUHD
StudioCanal is thrilled to announce that the iconic cult classic, Highlander, is being released to own on 4K UHD for the very first time 31st October 2022 with brand-new artwork from celebrated artist Matt Ferguson. END_OF_DOCUMENT_TOKEN_TO_BE_REPLACED
Top PicksView