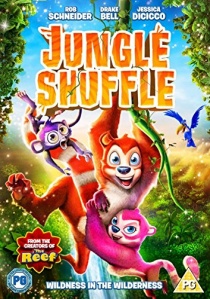 NewsAnimationFamily
News Article Go back to homepage
Get ready for a rumble in the jungle! From the creators of The Reef, Jungle Shuffle is released on DVD by Signature Entertainment on 25th January 2016.
Drake Bell, Rob Schneider, Jessica DiCicco, Brianne Brozey
Taedong Park, Mauricio De La Orta
Youngki Lee
Signature Entertainment
1 hour 25 minutes
25/01/2016
#JungleShuffle
Thank you for supporting DVD365.net when you order using the link(s) below. As an Amazon Associate we earn from qualifying purchases
Buy DVD
Information

It's a jungle out there! Manu (Drake Bell, The Reef 2: High Tide) and Sacha are two very much in love, young racoons living in the tropical Mexican rainforest. The only problem is that Sacha is the daughter of the raccoon tribe's King and Manu is a bit of troublemaker...

When Manu's escapades leave the tribe's most worshipped statue destroyed, the King exiles Manu to live on his own in the jungle. A year later the fumbling youngster has turned into a strapping young male, but one thing hasn't changed: Manu is still in love with Sacha.

When human poachers capture Sacha, Manu sets out on a thrilling adventure to save the royal princess and redeem himself to the tribe! Also starring Rob Schneider (50 First Dates, The Hot Chick) and Jessica DiCicco (Dino Time, Kung Fu Panda). Get ready for a rumble in the jungle!

From the creators of The Reef, Jungle Shuffle is released on DVD by Signature Entertainment on 25th January 2016.