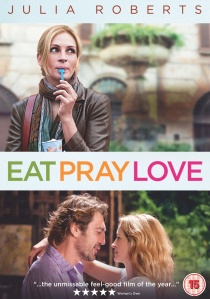 Eat Pray Love - a true story based on Elizabeth Gilbert's inspirational best-selling memoir and one of the most talked about movies of the summer - begins its journey on Blu-ray and DVD on 7th February 2011, courtesy of Sony Pictures Home Entertainment. The heart-warming story of one woman's courageous pursuit of self-discovery, Eat Pray Love proves that there really is more than one way to let yourself go and see the world.

Ryan Murphy, creator of TV's "Glee", directs his screenplay adaptation (co-written with Jennifer Salt) of the acclaimed book. Eat Pray Love was produced Dede Gardner, while Brad Pitt, Jeremy Kleiner and Stan Wlodowski served as Executive Producers. The Director's Cut, not seen in cinemas and featuring scenes from the book, will be available on both Blu-ray and DVD and will also include the original theatrical version of the film. The Blu-ray will contain exclusive bonus features that include behind-the-scenes featurettes highlighted by interviews with Roberts, Murphy and Gilbert while on location in Rome, India and Bali.

The Blu-ray Disc also contains movieIQ+sync, a new and immersive BD-Live movie watching experience that uses a connected real-time movie database. With a movieIQenabled Blu-ray Disc and an Internet connected Blu-ray player, movie fans can dive into continuously updated information on the cast and crew while exploring relevant trivia such as production facts, music and soundtrack information, all tied to scenes within the movie. Additionally, movieIQ+sync gives viewers the full movieIQ experience on their computer or iPhone by linking to the Blu-ray disc.

Liz Gilbert (Roberts) is a modern woman on a quest to marvel at and travel the world while rediscovering and reconnecting with her true inner self. At a crossroads after a divorce, Gilbert takes a year-long sabbatical from her job and steps uncharacteristically out of her comfort zone, risking everything to change her life. In her wondrous and exotic travels, she experiences the simple pleasure of nourishment by eating in Italy; the power of prayer in India, and, finally and unexpectedly, the inner peace and balance of love in Bali.

UHD
Disney and Pixar's original feature film Luca, released on DVD, Blu-ray and 4K UHD on 23rd August 2021, is a fun and heartwarming story about friendship, stepping out of your comfort zone and two teenage sea monsters who ... END_OF_DOCUMENT_TOKEN_TO_BE_REPLACED
Top PicksView