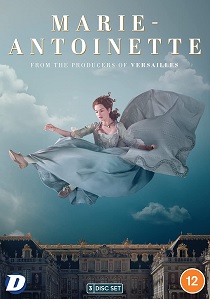 From the writer of The Favourite, comes a bold and modern telling of the story of Marie Antoinette, released on DVD and Blu-ray 20th February 2023 from Dazzler Media.

Marie Antoinette is a story of a female rebel with a cause in late 18th Century France. Marie Antoinette begins her life at Versailles as a "fresh bouquet of wild flowers", morphs into a teenage rebel and emerges as Queen of the Zeitgeist.

When the very young Marie Antoinette is dispatched to Versailles to marry the Dauphin, she has no idea what she is letting herself in for. Her only duty as Dauphine is to consummate her marriage to Louis and deliver the next Bourbon heir. But this proves to be her greatest challenge when her awkward, teenage husband refuses to play ball. Louis would prefer to kill a hare than kiss his wife. First, she must make her hostile prince her friend.

Without an heir, she is exposed to the enemies who line up to attack her from within the heart of the Royal Family. But they have started with the wrong girl. Like her mother, the Empress of Austria, Marie Antoinette is a fighter. She will impose her will on Versailles and recreate it in her own image!

UHD
When an alien spacecraft of enormous power is spotted approaching Earth, Admiral James T. Kirk resumes command of the USS Enterprise in order to intercept it, in the ... END_OF_DOCUMENT_TOKEN_TO_BE_REPLACED
Top PicksView