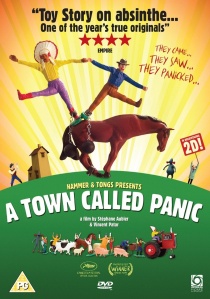 Even animated plastic toys like Cowboy, Indian and Horse have problems too. Cowboy and Indian's plan to surprise Horse with a homemade birthday gift backfires when they destroy his house instead. Surreal adventures ensue as the trio travel to the centre of the earth, trek across frozen tundra and discover a parallel underwater universe where pointy-headed (and dishonest!) creatures live. Each speedy character is voiced - and animated -as if their very air contains both amphetamines and laughing gas. With panic a permanent feature of life in this papier mâché town, will Horse and his girlfriend ever be alone?

A Town Called Panic, released by Optimum Home Entertainment on DVD on 15th November 2010, is one of the rare full-length animated films ever to secure the honour of a coveted slot in the Official Selection (in this case, Out of Competition) at Cannes. The cast first appeared in acclaimed short films that followed the offbeat adventures of a dozen characters that happen to be generic plastic toys.

A Town Called Panic became a cult TV series whose 20 memorably outrageous animated episodes were telecast in 2003 by Canal+ (in France and Belgium) prior to making their way around the world to festival acclaim and TV popularity (Nickelodeon, WDR, Canal+ Spain, etc.), eventually landing in the excellent hands of the folks at Aardman Studios, who handled the English dubbing.

This eagerly awaited feature-length version is being presented in the UK by Hammer and Tongs (Hitchhiker's Guide, Son of Rambow), huge fans of the TV series and now film, and premiered at Somerset House this summer before receiving a theatrical release on September 20th.

HotUHD
After moving to a new town, two brothers discover that the area is a haven for vampires as the classic The Lost Boys is released on 4K UHD 20th September 2022 from Warner Home Video. END_OF_DOCUMENT_TOKEN_TO_BE_REPLACED
Top PicksView