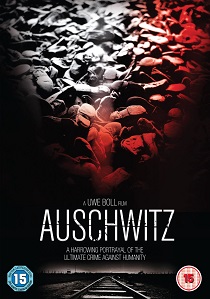 Notorious German director Uwe Boll has already caused media outrage with his latest film Auschwitz which lays bare for the first time what actually happened inside the Nazi's most notorious World War II death camp. The film will be available on retail DVD from High Fliers on 11th July 2011 and is already set to be one of the most controversial releases of 2011.

There are no heroes and villains. Instead, Auschwitz which takes its name from the camp is simply a cold hard depiction of what took place there and the film's graphic trailer on YouTube has been viewed by over 400,000 people to date.

Auschwitz was built in 1940 and an estimated 1.2 million people are believed to have been slaughtered there by the end of the war. The film follows a typical day at the camp and for the first time shows the true horror of the gas chambers and the total and utter disregard for humanity and human life.

A train arrives with the carriages packed with Jews who have been rounded up across Nazi Europe, they are taken off the train, herded into the gas chambers and then their bodies are cremated.

The Nazi's who run Auschwitz - Boll plays one of the camp commandants - carry out their grisly work with an almost surreal calm and sense of purpose. The appalling lack of awareness to these atrocities by young people today is highlighted at the beginning and end of the film when Boll interviews teenage German schoolchildren who know little of what their forefathers were responsible for 70 years ago.

Commented Uwe Boll: "We see these interviews with German school kids and it's shocking that they really don't know a lot about the Holocaust anymore. It was the biggest organised killing of humans in history and in the film we see just another ordinary day for the victims at the death camp.... from the train until the oven".

Related Articles
Assault on Wall Street, In The Name Of The King: Two Worlds, Far Cry
303 Squadron
We Are The Night
Comments
DVD Releases News Pick

DVD
Released on DVD 4th April 2022 from BBC Worldwide, Golden Globe, Emmy and BAFTA winner Ben Whishaw stars in This Is Going To Hurt, Adam Kay's adaptation of his best-selling memoir about life as a junior doctor. END_OF_DOCUMENT_TOKEN_TO_BE_REPLACED
Top PicksView