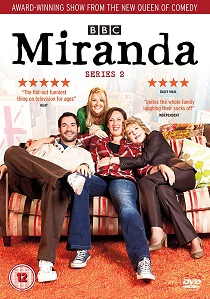 The second series of Miranda, the multiple British Comedy Award-winning sitcom, is released on DVD on 7th November 2011 from 4DVD. Starring certified 'Queen of Comedy' Miranda Hart, the hugely-popular series will also be released as a boxset alongside series 1 for the first time. Containing never-before-seen behind the scenes material, this is a must-have for any comedy fan!

Following on from the much-celebrated first series, series 2 catches up with Miranda (Hart) as she continues her hilarious route through life, stumbling from one disaster to the next! Miranda is joined once again by a stellar cast of British actors including Patricia Hodge (Maxwell, The Legacy of Reginald Perrin) as Miranda's overbearing mother Penny, Sarah Hadland (That Mitchell & Webb Look) as Miranda's best friend Stevie, Sally Phillips (Bridget Jones' Diary, Smack The Pony) as Sloane Ranger school friend Tilly and Tom Ellis (EastEnders) as Miranda's long term crush Gary. This series also sees Tom Conti (Friends, Shirley Valentine) make a guest appearance as Miranda's Dad.

Since Gary left for Hong Kong, in doing so taking with him Miranda's only chance at a relationship, series 2 finds Miranda watching TV all day in her pyjamas with only the biscuit tin for company. Her long-suffering friend and confidante Stevie eventually persuades Miranda to stop wallowing and to take hold of her life, encouraging her develop a better, more successful version of herself. However, Miranda soon discovers that the path to success, as with all things in her life, is fraught with difficulty; made all the worse by the meddling of her mother and boarding school nemesis Tilly. Can Miranda finally overcome these obstacles, get fit and emerge as a socially-at-ease woman of grace and charm...?

This new release has a host of DVD extras including a behind-the-scenes tour and Miranda's on-set interviews with cast, friends and family including Claire Balding, Frank Skinner and Miranda's real-life mum alongside on screen mum, Patricia Hodge. Full of all the fun and frolics we have come to love, Miranda is back, funnier and more farcical than ever!