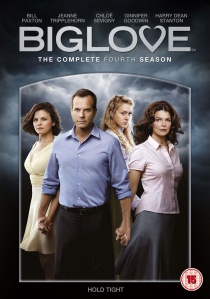 Big Love, the gripping unique family drama, is back for another compelling installment as The Complete Fourth Season is released on DVD on 16th April 2012 by HBO Home Entertainment.

This season presents Bill with two challenges - his campaign for public office and his growing rift with his eldest son, Ben (Smith). Bill seeks a seat in the Utah State Senate as part of a plan to legitimize The Principle - which faces renewed and widespread animosity from the public. Bill learns of Ben's growing attraction to Margene and agrees that Ben should spend some time away from the house, which Ben interprets as being 'cast out' of the family. This shocks Bill's family, who recently discovered Bill's own criminal past after his exile, revealed to the public by Bill's political opponent. Bill must also grapple with Marilyn Densham (Sissy Spacek), a powerful and conniving lobbyist whom he likens to a common criminal.