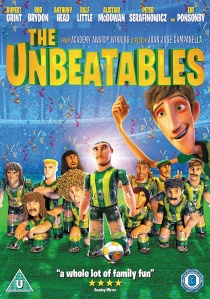 The Unbeatables is the hilarious footie flick that's the perfect gift for young football fans everywhere. Kick back and enjoy the fun packed family adventure as The Unbeatables comes to DVD on 9th February 2015, from Vertigo Films.

Amadeo (Grint) reigns supreme in the local bar at table football. Taking on all-comers he is "unbeatable". Frustrated by his only ever defeat at the hands of Amadeo, Flash (Head) the town bully challenges him to a real football match - something which Amadeo has no chance of winning. With all hope lost Amadeo's time as a champion looks to be over, until an unexpected intervention from the village and the support of his love Laura make things a whole lot more interesting...

Don't miss this top of the league animated fun footie adventure as The Unbeatables keeps the laughs kicking and arrives on DVD from 9th February 2015.