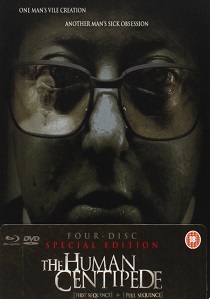 Since its release, The Human Centipede (First Sequence) has become a worldwide cultural phenomenon. Inspired by a conversation over what punishment would be appropriate for convicted paedophiles, Tom Six's bizarre biological horror film has the distinction of being 100% medically accurate. The film went on to win more than 10 international awards including the awards for "Best Horror Film" and "Best Actor" at Fantastic Fest 2009, "Best Picture" at the 2009 Scream Fest and "Most Memorable Mutilation" at the 2010 Scream Awards.

The highly anticipated follow up, The Human Centipede 2 (Full Sequence) premiered in 2011 as the opening film at Fantastic Fest in Austin, Texas and made instant worldwide headlines when the BBFC banned the film outright in the UK claiming the film could potentially harm viewers. The controversy led to worldwide debates and major articles across the world press. After nearly four months of detailed discussion and debate, an agreement with the BBFC was reached and a viable cut of the film that did not compromise the level of horror, was released theatrically and on DVD and Blu-ray in the UK.

The Human Centipede films broke the mould, set a new standard in the horror genre and in the process went on to become major cult hits. Now for the very first time, both films will be released together by Monster Pictures as a collectable Four-disc Special Limited Edition Dual Format (Blu-ray & DVD) SteelBook, available from 29th October 2012. Both films will also be available on DVD bundled together in a slipcase with brand new artwork.

When their car breaks down in rural Germany on a road trip across Europe, two young American girls go in search of help. Finding an isolated house, the owner Dr. Heiter (Dieter Laser), a retired surgeon, offers to call them a taxi.

With the promise of a drink and dry place to wait, the girls soon discover that there is something not quite right about the formidable Dr. Heiter. Plunged into the middle of a surgical nightmare that make the experiments of Dr. Moreau seem humane, they soon realize they are to become a lot closer to each other than they ever wanted to be, thus bringing to life the Doctor's sick lifetime fantasy, "The Human Centipede".

This follow-up to Tom Six's cult horror smash hit of 2010 ups the ante with a brute force unparalleled in film today. The iconic Dr. Heiter has inspired a real-life protégé, the sickly, mentally disturbed car park attendant -- Martin -- who takes his gory inspiration from the original film to horrific new extremes!

A loner, Martin (Laurence R. Harvey) lives with his nagging mother on a bleak London council estate, where loud neighbours and squalid living conditions threaten to plunge this victim of sexual and psychological abuse over the edge. Working the night shift as an attendant at an underground car park, he indulges his obsession with The Human Centipede and decides to emulate his hero, by creating his own 12-person human centipede.

What follows is one of the most harrowing and terrifying films ever conceived, featuring a central character that makes Dr. Heiter seem tame in comparison. The Human Centipede 2 (Full Sequence) is a triumph in biological horror by one of the new masters of the horror film.

DVD
Released on DVD 4th April 2022 from BBC Worldwide, Golden Globe, Emmy and BAFTA winner Ben Whishaw stars in This Is Going To Hurt, Adam Kay's adaptation of his best-selling memoir about life as a junior doctor. END_OF_DOCUMENT_TOKEN_TO_BE_REPLACED
Top PicksView