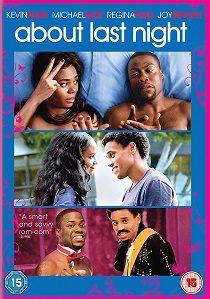 In a modern reimagining of the 1986 original film starring Demi Moore and Rob Lowe, About Last Night follows two couples as they journey from the bar to the bedroom, and as their relationships are eventually put to the test in the real world. Directed by Steve Pink (Hot Tub Time Machine), the film also stars Paula Patton (Jumping the Broom), Christopher McDonald (Happy Gilmore) and Adam Rodriguez (Magic Mike).

Fans can go behind-the-scenes with an in-depth featurette, An Un-Romantic Comedy, which explores the making of the film and differences from the 1986 original.

Kevin Hart, Michael Ealy, Regina Hall and Joy Bryant star in this hilarious romantic comedy about what men and women really want. Bernie (Hart) and Joan (Hall) are two fiery flirters who are passionate about everything from hookups to breakups. When he sets up his best friend, Danny (Ealy), with her roommate, Debbie (Bryant), the sparks soon fly as they try to navigate the relationship minefields from the bar to the bedroom.