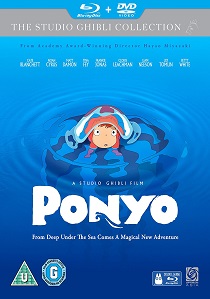 Be transported into the sublime underwater world of Studio Ghibli (Spirited Away, Howl's Moving Castle) as Ponyo makes a splash onto Blu-ray and DVD on 7th June 2010, courtesy of Optimum Home Entertainment. From acclaimed anime master and Academy Award winning director Hayao Miyazaki in his ninth animated feature, and Disney/Pixar executive producer John Lasseter (Two-time Academy Award winner), Ponyo is a wonderfully moving tale about the friendship between a five-year-old boy and a goldfish princess who yearns to be human.

The daughter of the king of the ocean Ponyo is no ordinary goldfish - she has all the magic of the sea at her disposal. But when five-year-old Sosuke finds her near his seaside home, a special connection sparks between the two children, and Ponyo becomes determined to become human. Transforming into a little girl, Ponyo shows up on Sosuke's doorstep, delighted to make herself at home with her new land-dwelling family. However, her magical powers confined to the Earth begin setting the mystical balance of the world off kilter, and even though the innocent love Ponyo feels for her friend is strong, it will take some help from the greatest powers in the ocean to make things right again.

The latest film from the internationally acclaimed Studio Ghibli, encapsulates everything that makes the studio's output so unique. Breathtaking animation combined with thrilling storytelling makes this another worthy addition to the Ghibli catalogue and the perfect film for all the family this summer!