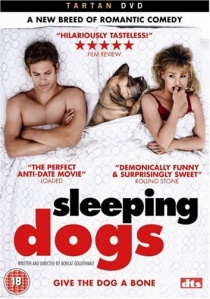 Amy has a secret. A shameful sexual indiscretion from her college days. When she and her fiancé John decide there should be no secrets between them, she's reluctant to tell . On an awkward visit to her uptight suburban family, she finally confesses and the repercussions sweep through her morally uptight family like a whirlwind, affecting all their lives.More importantly, it reveals who can be trusted and who can cope with the truth: a brother with drug addiction, a bored father who knows more than he lets on, an emotionally repressed mother who has deeper passions, and a boyfriend who can never face puppy love again. It makes you wonder if you really should let sleeping dogs lie.

Bobcat Goldthwait's Sleeping Dogs, released by Tartan Video on 16th July 2007, is a playfully mischievous comedy that takes a shocking revelation as its starting point for this warm hearted study of honesty. Having been part of the accident-prone cop team Police Academy, he's now graduated into directing, winning praise at Sundance Film Festival as well as admirers such as Terry Gilliam and Robin Williams. He takes the black humour of the Farrelly Brothers and Meet The Parents then stirs in lashings of cynicism and romance. He brings together a enchanting young cast with Melinda Page Hamilton (Sister Mary Bernard in Desperate Housewives) playing breezy Amy with able support from both Bryce Johnson as her bemused boyfriend, and Colby French (Grosse Point Blank, TV's Heroes).

Sleeping Dogs is a shaggy dog's tale with a difference. It's subversively funny but also a touching examination of relationships. Time to unleash the dogs of comedy.

DVD
Doctor Strange teams up with a mysterious teenage girl from his dreams who can travel across multiverses in Doctor Strange in the Multiverse of Madness, released on DVD, Blu-ray and 4K UHD 18th July 2022 from ... END_OF_DOCUMENT_TOKEN_TO_BE_REPLACED
Top PicksView