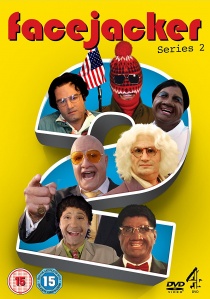 NewsTV SeriesComedy
News Article Go back to homepage
BAFTA and Comedy Award winner Kayvan Novak is back! Watch him terrorise the unsuspecting British public and take on the USA for the first time with the hilarious Facejacker: Series 2, out on DVD from 7th May 2012 from 4DVD.
Tony Montalbano, Rahim Gharache, Danny Babington, Kayvan Novak
Ed Tracy, Kayvan Novak
Mario Stylianides, Gemma Rawcliffe, Emily Marks, Michael Livingstone
4DVD
2 hours 21 minutes
07/05/2012
Thank you for supporting DVD365.net when you order using the link(s) below. As an Amazon Associate we earn from qualifying purchases
Buy DVD
Information

BAFTA and Comedy Award winner Kayvan Novak (Fonejacker, Four Lions, Sirens) is back! Watch him terrorise the unsuspecting British public and take on the USA for the first time with the hilarious Facejacker: Series 2, out on DVD from 7th May 2012 from 4DVD.

Following on from the huge success of Facejacker Series 1, rising star Kayvan Novak returns to showcase his hilarious and diverse array of characters, voices and sublime comic improvisational skills with Facejacker Series 2, out to own on DVD from 7th May 2012.

Disguised with the aid of prosthetics, Novak morphs himself back into his popular comical creations. These include, charismatic car salesman, Terry Tibbs - a wheeler dealer with the gift of the gab, Ugandan scamster, Augustus Kwembe - who attempts to elicit people's bank account details with a series of schemes including masquerading as a river patrol officer and a 'Boris Bike' inspector! Then there's super irritating complaint monger, Durfrais and charlatan art critic Brian Badonde, along with several brand new characters! All are thrust into real-life situations where they baffle and confuse members of the public with side-splitting outcomes!

As well as pranking Great Britain, Novak travels across the pond to the USA, taking his best known characters with him to prey upon the unsuspecting American public for the first time!

Novak's exceptional talent for accents and voices will have you watching over and over again! Prepare to laugh and be gobsmacked by Novak's nerve once again with the highly anticipated Facejacker Series 2 and re-live all his Jacker moments with the boxset of Fonejacker Series 1 & 2 and FaceJacker Series 1 & 2 also out to own on DVD from 7th May 2012.

BD
In The Duke, released on DVD and Blu-ray 13th June 2022 from Warner Home Video, Kempton Bunton, a 60 year old taxi driver, steals Goya's portrait of the Duke of Wellington from the National Gallery in London. END_OF_DOCUMENT_TOKEN_TO_BE_REPLACED
Top PicksView