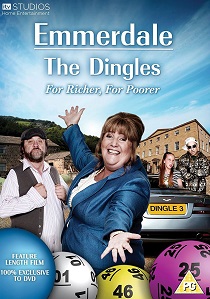 Emmerdale: Dingles For Richer For Poorer (2010)

The 15th November 2010 sees two parallel worlds collide as the Emmerdale special, Dingles For Richer For Poorer, is filmed for the first time on DVD courtesy of ITV Studios Home Entertainment.

Exclusively for DVD and never to be broadcast on TV, Dingles For Richer For Poorer is the must see film Emmerdale fans have been waiting for - your favourite Emmerdale regulars in a feature length story as you've never seen them before!

The Dingle family are feeling the pinch, resorting to eating scraps and selling old bric-a-brac to make ends meet. Clutching at straws, Zak sets off with Belle to buy a Eurobillions rollover week ticket.

As Zak and Belle make their way to purchase the ticket, we enter two parallel universes and the fun enfolds as fate serves up very different futures with their lucky numbers and potential winning ticket...

We then seamlessly experience the two ever shifting worlds as the most turn of events leads the extended Dingle family into two parallel but polar opposite futures... Will it be the reality of winning the lottery that brings delight, or will the harsher reality of lies and bogus tickets leave the clan counting the cost of nearly winning a fortune? The havoc unfolds with hilarious results as the film asks the question "How much would winning the lottery change you?"