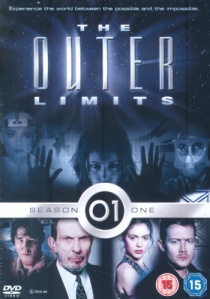 The complete first season of The Outer Limits, the wildly original and widely acclaimed sci-fi series is finally coming to DVD! Inspired by the 1960s series of the same name, The Outer Limits has continued to entertain and intrigue across generations and is released on 30th April 2007 by Twentieth Century Fox Home Entertainment.

Each episode of The Outer Limits explores the new frontiers in technology, outer space and human experience, revealing our greatest hopes and darkest fears. There is no set cast, but special guest appearances in season 1 include Alyssa Milano (Charmed), Ryan Reynolds (Two Guys, a Girl and a Pizza Place), Beau Bridges (Stargate SG-1), Rebecca De Mornay (The Practice) and Robert Patrick (The Unit).

Episodes of The Outer Limits have explored the consequences of such controversial and thought-provoking topics including genetic manipulation, alien visitation and life after death. In the pilot episode entitled "Sandkings" a scientist is studying Martian life when, after one of his test subjects almost escapes, the project is cancelled. Unwilling to give up his research he smuggles a sample of Martian eggs out of the lab and incubates them. What hatches is intelligent, fast and hungry...

The six disc DVD box set of The Outer Limits Season 1 contains all 22 episodes. Special features in the DVD box set include a selection of featurettes. You are about the experience the awe and mystery which reaches from the deepest inner mind to ... The Outer Limits on DVD. Please standby.