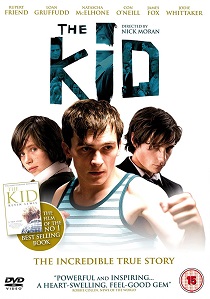 News
News Article Go back to homepage
Based on the international best-selling novel of the same name, The Kid, released on DVD by Revolver Entertainment on 7th March 2011, follows the journey of one man fulfilling his dreams against all odds, rising from an abusive childhood to become a best-selling author.
Adriane Brown, Johnathan Staci Kim, Joseph Chan, Justin Pierce, Sarah Henderson, Leo Fitzpatrick
Larry Clark
Patrick Panzarella, Cathy Konrad, Michael Chambers, Leigh Blake
Revolver Entertainment
1 hour 31 minutes
07/03/2011
Thank you for supporting DVD365.net when you order using the link(s) below. As an Amazon Associate we earn from qualifying purchases
Buy DVD
Information

Based on the international best-selling novel of the same name, The Kid, released on DVD by Revolver Entertainment on 7th March 2011, follows the journey of one man fulfilling his dreams against all odds. As heartbreaking as it is inspiring, the film tells the true story of Kevin Lewis, a boy who rose from an abusive childhood to become a best-selling author.

Kevin Lewis grew up on a council estate in South London. Beaten and starved by his parents, overlooked by the social services and bullied at school, he was finally offered a chance to escape his nightmare world and was put into care. Despite his best efforts to make things work out, his life spiralled out of control. At the age of 17 he became caught up in the criminal underworld of London, where he was known as 'The Kid'. In spite of the violence he suffered at the hands of his parents, continuous torments at school and in the face of endless rejection, Kevin succeeded in making a better life for himself.

Today, Kevin combines his creative skill with his knowledge of the inner city to write crime novels with gritty realism. Best-sellers include Kaitlyn, Frankie, Fallen Angel and newest release Scent of a Killer.