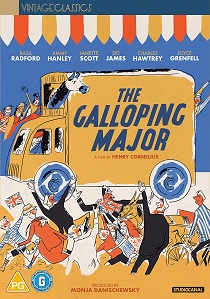 This brand-new restoration of the 1951 British comedy The Galloping Major directed by Henry Cornelius is based on an idea by Basil Radford.

After a successful day at the races, Major Arthur Hill (Basil Radford) and Harold Temple (Hugh Griffith) decide to raise a £300 syndicate to buy a certain racehorse. With excited help from their friends (Janette Scott, Jimmy Hanley, Rene Ray, Joyce Grenfell, A. E. Matthews) they get the money, but things don't go so smoothly from here.

First, they accidently buy the wrong horse which proves to have more of an affinity for jumping than racing. They then decide to train it themselves as a jumper under the new name "The Galloping Major". However, on the night before the Grand National, the horse mysteriously disappears...

The Galloping Major is released 8th August 2022 on DVD and Blu-ray from StudioCanal as part of their Vintage Classics collection.

Related Articles
The Blue Lamp: Digitally Restored
How To Lose Friends and Alienate People, Crack in the World
Whisky Galore!, The Winslow Boy
Passport To Pimlico, I Am A Camera: Vintage Classics
Comments
Hot Pick

HotUHD
After moving to a new town, two brothers discover that the area is a haven for vampires as the classic The Lost Boys is released on 4K UHD 20th September 2022 from Warner Home Video. END_OF_DOCUMENT_TOKEN_TO_BE_REPLACED
Top PicksView