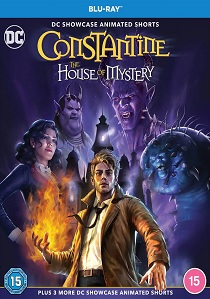 Constantine: The House of Mystery (2022)

NewsAnimationDC Comics
News Article Go back to homepage
After rewriting time and preventing the Apokalips War from ever happening, John Constantine finds himself imprisoned and facing a punishment he does not yet understand in Constantine: The House of Mystery, released on Blu-ray 2nd May 2022 from Warner Home Video.
Matt Ryan, Ray Chase, Robin Atkin Downes, Grey Griffin, Lou Diamond Phillips, Camilla Luddington
Matthew Peters
James Krieg, Rick Morales
Warner Home Video
1 hour 16 minutes
02/05/2022
#ConstantineTheHouseOfMystery
Thank you for supporting DVD365.net when you order using the link(s) below. As a member of the Zavvi affiliate program we earn from qualifying purchases
Buy BD
Information

After rewriting time and preventing the Apokalips War from ever happening, John Constantine finds himself imprisoned in The House of Mystery - facing a punishment he does not yet understand. As he explores the house's labyrinths, he soon finds Zatanna and many friends, but time and again these meetings end in his brutal death.

Facing an endless loop of his own demise, the ever-brilliant Constantine begins to unravel the path leading to his hellish purgatory. Can he outwit his captor and escape his sentence, or is he destined to serve his eternal verdict?

With three more animated shorts - Kamandi: The Last Boy on Earth! The Losers, and Blue Beetle - Constantine: The House of Mystery is released on Blu-ray 2nd May 2022 from Warner Home Video.