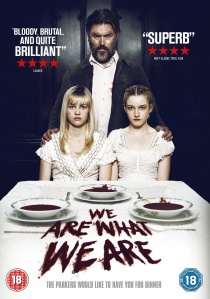 A uniquely disturbing tale from the director of Stake Land, Jim Mickle brings a tense, heartbreaking and dramatic horror to life in this beautifully told tale of family, tradition and death as We Are What We Are is released on DVD on 3rd March 2014 courtesy of Entertainment One. With breakout performances from Bill Sage (Boardwalk Empire) and newcomers Julia Garner (Martha Marcy May Marlene) and Ambyr Childers (The Master), We Are What We Are is an undeniably stylised piece of cinema.

The Parkers are a seemingly wholesome family but patriarch Frank rules over them with a rigorous fervour. When tragedy strikes and his daughters Iris and Rose are forced to assume terrifying responsibilities that extend beyond those of a typical family, the local authorities begin to uncover clues to a horrible truth that the Parkers have hidden for so many years.

BD
Four years after South Korea's total decimation in Train To Busan, the zombie outbreak thriller that captivated audiences worldwide, the next nail-biting chapter in the post-apocalyptic world Train to ... END_OF_DOCUMENT_TOKEN_TO_BE_REPLACED
Hot PicksView