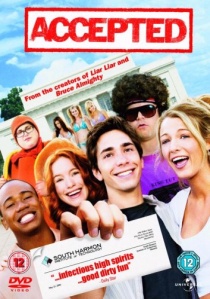 Universal Pictures UK announces the release of Accepted, a fun packed, laugh a minute story of an American teenagers desire to please his parents and have fun in the process, available to own and rent on DVD and Download-To-Own from 12th February 2007.

Bartleby Gaines (Justin Long Dodgeball) has just graduated high school and 'the greatest years of his life' beckon as he chooses which College he'll spend the next four years of his life becoming a man and a scholar; but there's one problem - he needs to be Accepted.

After being rejected from every college he applied to and with the overbearing pressure from his pushy parents, Bartleby does what any man would do in his situation, well kind of. Bartleby needs a plan and so decides to create the fictitious South Harmon Institute of Technology (S.H.I.T). Bartleby's buddy and self-confessed genius, Sherman, quickly creates the new College's website to pull the wool over his father's eyes as he demands to see if this unknown college is good enough for his boy!

But the deception doesn't end there. Bartleby is forced to hire out a dilapidated former psychiatric home when his father decides he wants to drop him off at his new college. Not only that, but his father wants to see the college Dean, a beer swilling abusive drunk, Bartleby recruited to fill the role, but some how, they pull it off!

With the help of his friends and a few hired non-English speaking immigrants, Bartleby hilariously carries off the scam and his family leaves him on his path to further education - or so they thought. The boys sit back and relax, that is until they have a rowdy rabble of unexpected new students, mistakenly accepted by the fake college through the fake website! Like Bartleby, they are the rejects of the American college system - lap dancers, loonies, skaters and wackos, and they're ready to party.

Bartleby and his friends decide to offer an alternative education to the new students, all of whom bring with them a $10,000 cheque for tuition. As the half pipe goes up and the kegs are opened, S.H.I.T. quickly becomes the hottest ticket in town. As the new students settle in to life at S.H.I.T, foul plans are afoot. The mean Dean of the prestigious (and real) Harmon College just a stone's throw away, sees this new college as nothing more than an eye sore and gets his lackie and head of KBE fraternity, Hoyt Ambrose to get rid of the rival college to make way for an extravagant new entrance to his college.

The film culminates with S.H.I.T.'s future in doubt, but Bartleby has other ideas. With an impending meeting with the state accreditation board, the fate of the students rests with Bartleby and his true passion for the S.H.I.T. will be tested to the limit.

Related Articles
Frank & Lola, Tusk, Walking with Dinosaurs The Movie, 10 Years, Alvin & The Chipmunks : Chipwrecked, Going the Distance, Alpha and Omega, Alvin And The Chipmunks: The Squeakquel, Planet 51
Sausage Party, War Dogs, Sausage Party, Hail, Caesar!, How To Train Your Dragon 2, 22 Jump Street, The Wolf of Wall Street, This Is The End, The Watch, 21 Jump Street, The Sitter: Totally Irresponsible Edition, Moneyball, Megamind, Cyrus, How To Train Your Dragon, Funny People, Strange Wilderness, Superbad, Knocked Up, How to Train Your Dragon: The Hidden World
Inside Out
About Last Night, Hot Tub Time Machine
The Losers, Quarantine, Stomp the Yard, Save the Last Dance 2
Comments
BD Releases News Pick

BD
A decade-defining classic from the imagination of Steven Spielberg and Chris Columbus, celebrating its 35 year anniversary, The Goonies is released on 4K UHD 31st August 2020 from Warner Home Video. END_OF_DOCUMENT_TOKEN_TO_BE_REPLACED
Hot PicksView