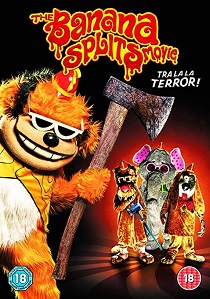 One banana, two banana, three banana, GORE! The cult-favourite animal rock-band from Hanna-Barbera's 1968 The Banana Splits Adventure Hour variety program is back with a blood-spattered vengeance!

The Banana Splits Movie will offer a new take on the classic characters. The film follows a boy named Harley and his family as they go to a taping of The Banana Splits TV show, which is supposed to be a fun-filled birthday for young Harley. But things take an unexpected turn - and the body count quickly rises. Can Harley, his mom and their new pals safely escape?

The film is written by Jed Elinoff & Scott Thomas (Raven's Home, My Super Psycho Sweet 16) and directed by Danishka Esterhazy (Level 16) with music by Patrick Stumph (Fall Out Boy, Gnome Alone). The movie is produced by Blue Ribbon Content in association with Warner Bros. Home Entertainment and SYFY.