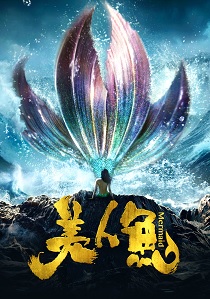 The Blu-ray Steelbook release of THE MERMAID include "The Making of The Mermaid"; a behind-the-scenes featurette where the cast and crew celebrate director Stephen Chow; and a music video for the film's song, Invincible, from artist Deng Chao.

From Stephen Chow, director of Kung Fu Hustle, comes The Mermaid the comedic action-filled phenomenon that has become China's biggest film of all time! When greedy real estate tycoon, Liu Xian (Deng Chao), buys up a pristine coastal enclave known as Green Gulf, he plans to turn it into the hottest property on the market. But Green Gulf harbors a secret: it's home to the last surviving mermaids, and they are done playing nice. Their plan: send the beautiful Shan (Jelly Lin) to seduce Liu and stop the destruction of their beloved oceans. But when their plan goes belly-up, neither humans nor mermaids are willing to back down, and a final, fatal frenzy becomes inevitable.

BD
A stellar cast sizzles in Heat, a taut psychological drama about an obsessive detective and a brilliant thief whose fates are linked in the aftermath of a high-stakes securities heist, released on 4K UHD 8th August 2022 from ... END_OF_DOCUMENT_TOKEN_TO_BE_REPLACED
Top PicksView