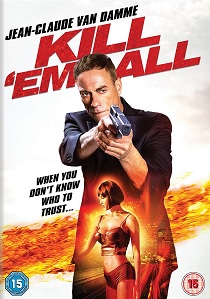 After a massive shootout, a mysterious stranger (Van Damme) arrives at a local hospital on the brink of death. Then, a foreign gang brazenly comes to the hospital to hunt him down. His nurse, the sole surviving witness to the follow-up shootout, must face an FBI interrogation that unlocks a plot of international intrigue and revenge.

With enough twists and turns, Kill 'Em All, released on DVD 29th January 2018 from Sony Pictures Home Entertainment, will keep you guessing until the final bullet is fired!

UHD
The surviving members of the resistance face the First Order once again, and the legendary conflict between the Jedi and the Sith reaches its peak as Star Wars: The Rise of Skywalker is released on ... END_OF_DOCUMENT_TOKEN_TO_BE_REPLACED
Hot PicksView

An orphaned girl discovers a magical garden hidden at her strict uncle's estate in The Secret Garden, arriving on DVD and Blu-ray 15th February 2021 from Universal Pictures (UK).
Movie quote

Starring #ElisabethMoss, why not settle down & binge watch on a #Tuesday with #TheHandmaidsTale Season 2 available…