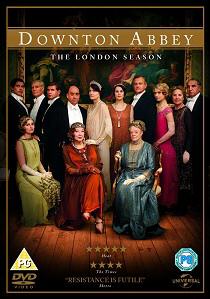 Downton Abbey: The London Season, the 2013 Christmas special episode of the ITV costume drama following the lives and loves of those above and below the stairs of an English stately home, is released on DVD and Blu-ray on 26th December 2013 courtesy of Universal Pictures UK.

It's summer and as part of Rose's 'coming out' she is to be presented at Buckingham Palace, an event which will give her the chance to rub shoulders with the Prince of Wales (Oliver Dimsdale).

The family are in London, preparing Grantham House for the busy social programme. Not one to miss such a grand occasion, Martha Levinson arrives from New York with Cora's recently disgraced brother Harold. Both outspoken and larger-than-life, they make quite an impression amongst certain members of London's high society.

When the Crawleys are implicated in a scandal that threatens to engulf the monarchy, Robert (Hugh Bonneville) will go to great lengths to protect the royal family, and his own.

HotDVDBDUHD
Fast forward to the 1980s as Wonder Woman's next big screen adventure finds her facing a wide array of foes including Max Lord and The Cheetah as Wonder Woman 1984 flies in on Blu-ray and 4K UHD 22nd March 2021 from Warner Home Video. END_OF_DOCUMENT_TOKEN_TO_BE_REPLACED
Top PicksView