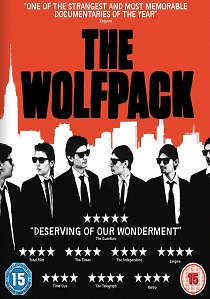 As adolescence looms, six intelligent, bright, teenage brothers have spent their entire lives locked away from society. All they know of the outside is gleaned from the movies they watch obsessively, and recreate meticulously. Nicknamed 'The Wolfpack', the brothers spend their childhood re-enacting their favourite films using elaborate homemade props and costumes.

With no friends and living on welfare, they feed their curiosity, creativity, and imagination with film. But when one of the brothers ventures outside, it sparks a fire in the Wolfpack to follow suit. Can they integrate into society and still maintain their close-knit brotherhood?

Combined with unprecedented access into The Wolfpack's world, and their vast archive of homemade movies, director Crystal Moselle crafts a captivating portrait of an extraordinary family. By fully immersing herself into their world, she is able to delve into the true nature of identity and creativity, by telling letting their remarkable story to naturally unfold on camera, without judgement.

The Wolfpack is released on DVD and Blu-ray by Kaleidoscope Home Entertainment on 28th December 2015.

UHD
Pixar Animation Studios serves up a breakthrough comedy with something for everyone as Ratatouille arrives for the first time on 4K Ultra HD 26th July 2021, exclusive to Zavvi. END_OF_DOCUMENT_TOKEN_TO_BE_REPLACED
Top PicksView