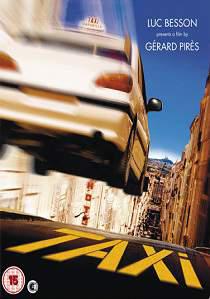 Besson's (Lucy, The Fifth Element), cult action comedy about a speed freak taxi driver who is forced to make a deal with the police or lose his licence, has spawned three sequels, a remake and a new 2014 TV. Now the original thriller that takes car chases to a whole new dimension, makes its debut in stunning high-definition Blu-ray on 10th November 2014.

Pizza delivery guy Daniel (Samy Naceri - Days of Glory), quits his round, re-unites with his girlfriend Lily played by screen siren Marion Cotillard (The Dark Knight Rises) and embarks on his dream job as a taxi driver. But his need for speed and dangerous ways lead him into the path of young police detective Emilien (Frederic Diefenthal). Daniel's reckless skills behind the wheel are just what the police need to catch a gang of serial bank robbers. Together the misfit pair team up for a wild ride of heart-pounding, adrenaline-filled chases through the streets of Marseilles.

Fasten your seat belt for the most thrilling Taxi ride of your life.

UHD
Say the 'B' word three times and have a wonderful Day-O as Tim Burton's Beetlejuice arrives for the first time on 4K UHD 31st August 2020 from Warner Home Video. END_OF_DOCUMENT_TOKEN_TO_BE_REPLACED
Hot PicksView