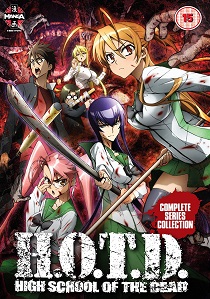 High School Of The Dead: The Complete Series Collection (2010)

Based on the hit manga series written by Daisuke Sato and illustrated by Shoji Sato, the zombie apocalypse saga High School Of The Dead : The Complete Series Collection, released on DVD and Blu-ray by Manga Entertainment on 29th August 2011, is brought to the screen as "an overly-sexualised and wonderfully violent" anime series that more than earns its 15 certificate with its very strong language, gratuitous nudity and graphic violence.

Produced by Madman and directed by Tetsuro Araki (Death Note; Black Lagoon) the series was perfectly summed up by Wired magazine in a review that claimed, "Had a sexually-tense George A. Romero set Dawn of the Dead in a Japanese school, it would probably resemble High School Of The Dead".

A seemingly ordinary day at Fujimi High School rapidly descends into a terrifying nightmare and a deadly fight for survival for a group of teenage students who find themselves caught up in the chaos caused by an outbreak of a new disease that turns its victims into ravenous, flesh-eating zombies. Forced to slay large numbers of their teachers and fellow students just to escape the confines of the school, they soon learn that the outbreak is not only a local or even national problem but also a global one.

As the pandemic rages out of control, society begins to collapse and everyday moral codes begin to crumble. Now it is up to Takashi Komuro to unite the small group of school friends and other survivors and lead them on a journey that they hope will take them to a place of safety beyond this new world of the living dead.

A must-see anime for all horror fans, High School Of The Dead is a fast-paced, shocking and ultra-violent thrill-ride of which Anime News Network wrote: "Other recent zombie works in Western entertainment have tried to play it ironic, or postmodernist, or just plain silly, but this one goes for straight-up horror-and pulls it off admirably".