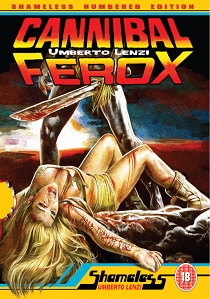 A decade on from starting the cannibal genre, director Umberto Lenzi has the final word, pushing the vomit envelope beyond the sick with his utterly nasty, nihilistic apotheosis that is Cannibal Ferox. So unredeemable that its own makers denounced it as barbaric..!

An academic, Gloria (Lorraine De Selle), journeys to the Amazon jungle where things go awry when her party encounters sadistic druggy villain Mike (Giovanni Lombardo Radice aka John Morghen), as the travellers venture further into the heart of darkness, they soon discover what it means to be the hunted prey.

Cannibal Ferox aka 'Make Them Die Slowly', topped the official Video Nasty list for its raw graphic scenes of torture, mutilations, murder and cannibalism. This new 2K restoration additionally features new grading which revives, for the 1st time, the original edgy look of the 16mm film stock it was shot on - finally presenting the film as it was first created by director Umberto Lenzi, on location in the Amazonian green inferno.

Cannibal Ferox is released on Blu-ray 30th July 2018 from Shameless.

Related Articles
The House On The Edge Of The Park, City Of The Living Dead
Comments
Hot Pick

HotUHD
StudioCanal is thrilled to announce that the iconic cult classic, Highlander, is being released to own on 4K UHD for the very first time 31st October 2022 with brand-new artwork from celebrated artist Matt Ferguson. END_OF_DOCUMENT_TOKEN_TO_BE_REPLACED
Top PicksView