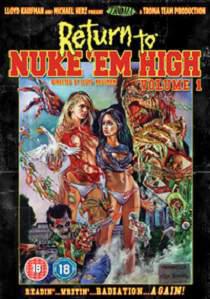 When the glee club fall victim to the poisoned tacos and violently morph into a menacing gang of psycho monsters called The Cretins, Chrissy and the new girl in school Lauren must work together to not only fight The Cretins from all sorts of gory mayhem, but also solve the mystery of the evil Tromorganic Foodstuffs Conglomerate before it's too late! Will they save Tromaville High School and subsequently the world?

Directed by Lloyd Kaufman, and with Lemmy from Motörhead making a guest appearance, Return To Nuke Em High Volume 1 is released on DVD on 14th July 2014 courtesy of Anchor Bay Entertainment.

UHD
With all the heart and humour audiences expect from Walt Disney Animation Studios, Big Hero 6, released on 4K UHD for the first time 30th August 2021 and exclusive to Zavvi, introduces you to a ... END_OF_DOCUMENT_TOKEN_TO_BE_REPLACED
Top PicksView